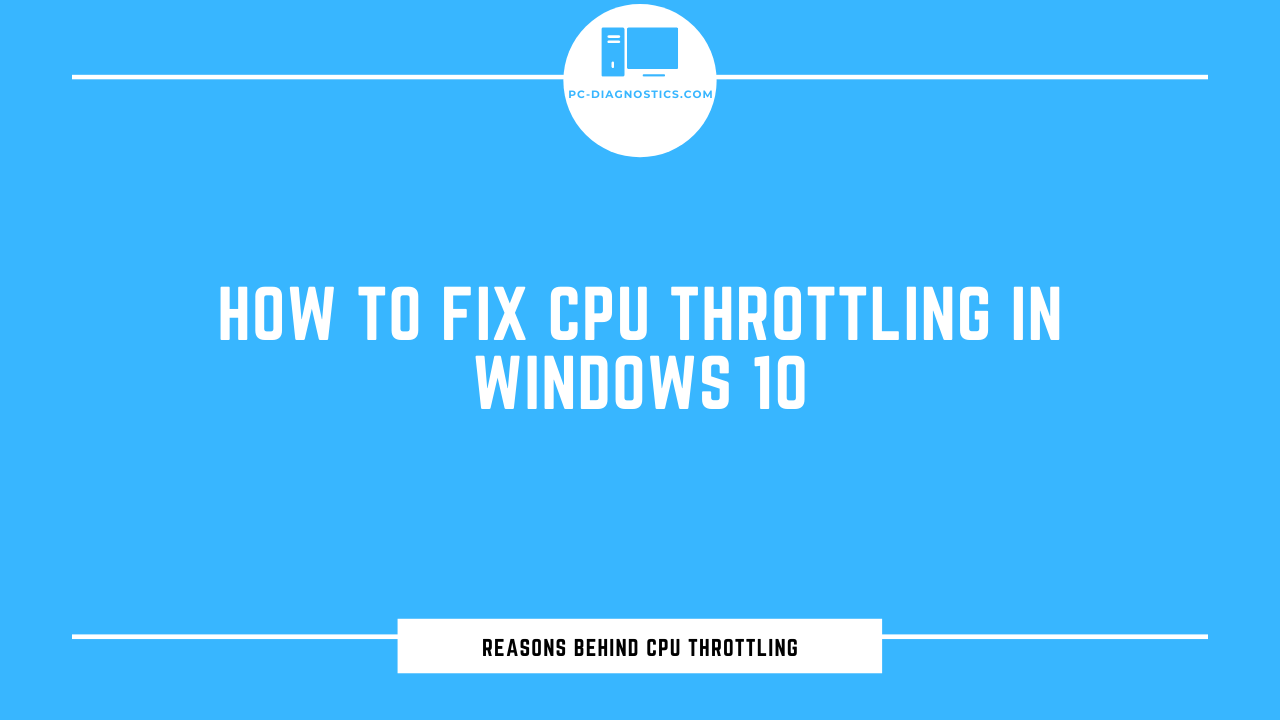 CPU Throttling or Power Throttling or Thermal Throttling is a feature introduced by Microsoft to help manage performance and battery life in Windows OS computers. While throttling, the PC detects the programs running on your PC and only lets those applications consume system resources that you are actively using. While doing so, it significantly reduces the resources provided to the apps running in the background.

Although throttling is meant to be an aid for your PC, it comes with its own set of issues. As reported by users, throttling at times limits resources for the apps that are being used actively. It may also lead to sharp overall PC performance surges. Whatever be the case, applying a CPU Throttling Fix becomes extremely important for you to perform any task on your PC.

But before we discuss the solutions, let us take a look at the reasons why CPU Throttling may occur on your PC.

There are a number of reasons that could lead to this issue, let us take a look:

If you are operating a very resource-heavy application or game on your PC, the CPU may initiate throttling. With heavy usage, the CPU temperature could rise significantly. This is not ideal for your PC, as it may damage the CPU components. Thus, to protect your PC from incurring any damages, the PC automatically reduces the performance to allow the system to cool down.

Your PC may also heat up more than usual because of external factors like dust build-up, or bad ventilation.

If an apt CPU cooling system is not installed on your PC, it will heat up quite often. If you use a high-performance processor and GPU, installing a cooling system that works fine for your PC becomes necessary. This will stop your PC from entering the state of thermal throttling.

If you use a laptop, power throttling may occur if the device is not connected to a power source. When your PC enters power saving mode, it may force the reduced performance to save battery. Although this makes your PC’s battery lasts long, it may hamper the overall performance.

How to Fix CPU Throttling in Windows 10 PC?

There are various methods that you can use to get rid of this issue. But selecting a fix totally depends on the reason that could be causing throttling.

To begin with, if you are using a laptop and it is unplugged from the power source, begin by plugging back the power adapter. If this doesn’t fix the issue or face performance issues as soon as you disconnect the power source, even if the battery is fully charged, I recommend you go through the solutions mentioned below.

Check for Dust Build Up

For your PC to perform, it is important for you to make sure that there is no dust accumulated in it. As dust accumulates on components like processor, GPU, RAM, Motherboard, and CPU Cooler, the heat dissipation is hindered. Be it a desktop or a laptop, carrying out a timely cleanup of CPU components is very important.

Good ventilation makes sure that there is ample flow of air to and from the PC components. If the airflow is blocked, your PC will heat up and enter the state of CPU Throttling. For desktops, the check if the components inside your CPU are not packed too tightly. If so, you may need a bigger CPU cabinet. You must also check the air vent for any blockage, which could be due to dust or if the vents are placed right against a wall too closely. For laptops, make sure not to block the air vents. If you place your laptop on a mattress or cushion, the airflow may get blocked, causing the system to heat up.

Be it CPU Cooling Fans or Liquid Cooling Devices; if an appropriate mechanism is not installed on your PC, it will heat up fast. You must check if your PC’s cooling component is suitable for the processor and the GPU you are using. You should also check whether the cooling device is working properly or not.

There are various other reasons related to CPU heating up abnormally. If you use the Overclocking feature and its not set properly, it could lead to CPU Throttling. Make sure to set overclocking properly on your PC. You can also make use of Thermal Paste in order to get rid of excess heat and thermal throttling.

If you are playing a resource-heavy game on your PC with full resolution, that could cause power throttling as well. This happens mostly if the GPU and Processor are overburdened.

What you can do here is enter the game settings and try to reduce the resolution a bit. You can also lower down a couple of other game settings that could make the game a bit less graphic intensive.

As mentioned earlier, Battery Saver could also lead to Power Throttling in PC. When your laptop is not connected to a power source, and the battery saver feature is On, you can face performance issues. This is because the PC wants to save battery, and in this process, it compromises the PC performance.

If none of the above solutions worked or apply to you, you could use the Local Group Policy Editor in Windows 10 to disable CPU Throttling. Here’s how:

Step 1: Press the Win + R keys to open the Run dialog box. In the Run box, type gpedit.msc and press the Enter key.

Step 2: The Local Group Policy Editor window will open. Here, go to the left pane and navigate to the following path:

Step 3: Go to the right pane now and double click on the Turn off Power Throttling option.

Step 4: In the new window that will open, select the Enabled option and save the settings.

Now, give your PC a restart and see if you are still facing Power Throttling issues.

Another way to disable CPU Throttling is through the Registry Editor.

Step 2: Go to the following location in the Registry Editor window: HKEY_LOCAL_MACHINE\SYSTEM\CurrentControlSet\Control\Power

Step 4: Select the Power Throttling key and go to the right pane. There, make a right-click and select New. From the options, you can select either DWORD (32-bit) value or QWORD (64-bit) value depending on whether the Windows 10 installed on your PC is based on 32-bit or 64-bit architecture. Name the new key as ” PowerThrottlingOff.”

Step 5: Make a double-click on the newly created key, and in the Value box that opens, enter 1 in the Value data section—select Base as Hexadecimal.

Now, save the settings in Registry Editor and exit the window. Restart your PC and see if this took care of the CPU Throttling issue.